The construction of the onshore part of the Balticconnector starts

The construction of the onshore part of the Balticconnector Estonian-Finnish gas interconnection, which will cost 43.4 million euros and is to be completed in October next year, officially commenced today, on 2 November.

The kick-off was celebrated in the place where the offshore and the onshore pipelines join the compressor station on the Pakri Peninsula, Estonia. Before the symbolic first weld, speeches were made by involved parties.

According to Kadri Simson, the Minister of Economic Affairs and Infrastructure, Balticconnector will unite the gas markets of Estonia and Finland. “Gas is said to be the bridge to fuels of the future. In addition to the economic impact, Balticconnector will undoubtedly have an environmental impact when biomethane produced in both countries will be moving through the pipelines in the future. Good connections and local production facilities have given Estonia the status of one of the most energy-independent countries in Europe, and we will continue working for energy efficiency.”

Ants Noot, chairman of the board of Eesti Gaas, outside Estonia known as Elenger, expressed hope for Balticconnector to contribute to the development of Estonia’s gas market and create opportunities for wider use of environmentally cleaner energy. “Natural gas is one of the fuels with the smallest environmental footprint.  Considerable investments have been made in energy security, and the broader natural gas user base is, the easier it will be to cover the investment costs and maintain gas price at the level affordable for consumers,” Noot said, adding that the interconnection will also create a feasible opportunity for connecting the urban areas of Keila and Paldiski to the gas network as well.

EG Ehitus, part of Elenger group, is acting as the main construction contractor for the project. The onshore pipeline of Balticconnector will pass through Kiili, Saku and Saue rural municipalities, Keila town and Lääne-Harju rural municipality. The length of the onshore part of the interconnection in Estonia will be 55 kilometers. The pipeline will be assembled from 12-meter-long sections, each weighing 1.8-2.6 tones, and the assembly will require nearly 6,000 welded joints. The onshore part of the pipeline will be completed by the end of October 2019.

“This is the largest pipeline construction project since Estonia regained independence; it is highly demanding from the engineering and technical perspective while the timeframe for completion is exceptionally short, under one year,” commented Ahto Aruväli, head of EG Ehitus, the leader of the construction consortium. “To perform this work, we have assembled a highly motivated and capable international team, consolidating various competencies of three companies from two countries: EG Ehitus and Scanweld from Estonia and Alvora from Lithuania.”

In some sections of the pipeline, preparation and construction works started in September, and installation will be going on along the entire length of the pipe since the beginning of November. The pipeline will have around 45 crossings with roads, railways and rivers. “One of the most complicated sections, placing the heaviest responsibility on us, is the approximately 15-meter-wide and 4-meter-deep crossing of the pipeline with Keila River, which will be completed by means of horizontal directional drilling,” Ahto Aruväli explained.

The cost of the construction of the Balticconnector onshore part is 43.4 million euros. The total cost of the project is 300 million euros, of which 206 million will be covered by the European Union. 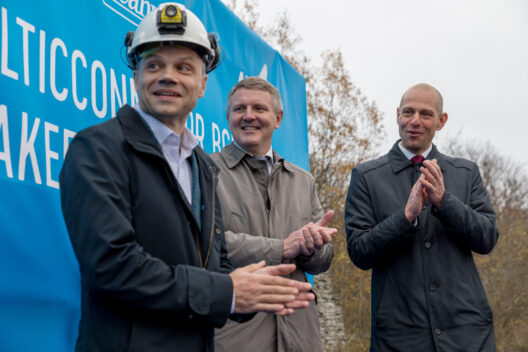