Keel was laid down for the LNG bunkering vessel of Elenger

The Dutch shipbuilding company Damen started the construction of the body of Elenger’s LNG bunkering vessel with the keel laying ceremony at Yichang shipyard in China. The ship will be completed in one year and start operating in the Gulf of Finland in the second half of 2020. 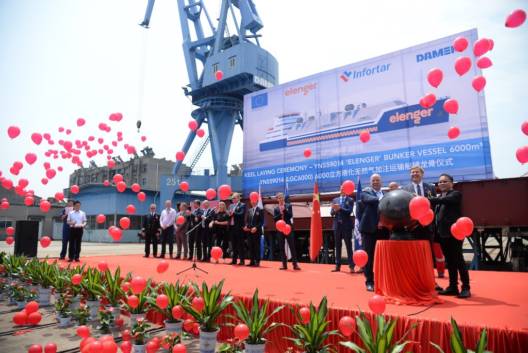 Kalev Reiljan, member of the management board of Elenger, says this will essentially be a floating LNG terminal. “While, as a rule, ships come to the terminal for bunkering, in this case our mobile terminal will come to the client itself,” Reiljan noted.

“There are only five such vessels in the world, and Elenger will have the sixth, which will be one of its kind in the northern and eastern part of the Baltic Sea. In addition to ports in Estonia in Finland, we are also planning to render services to ports in Latvia,” Reiljan added.

Two months ago, the first components of Elenger’s bunkering ship were cut out of 8-mm-thick sheet metal to form the partition between the ship’s engine room and tank hold. The assembly of the body will take until the end of the year. Currently established plans imply that the LNG tanks are to be installed in November, and launching is to take place in March next year. After water performance tests, the ship will be ready to arrive in Estonia in the summer of 2020 and start providing LNG bunkering services to clients on the Baltic Sea in the autumn.

The service area of the LNG bunkering ship will comprise the northern and eastern part of the Baltic Sea and focus on the Gulf of Finland. The vessel will be able to bunker tankers, cargo ships, service craft, passenger vessels and service craft in ports and in offshore waters, and its tanks will allow up to 6,000 m3 of liquefied natural gas (at -163 °C) to be delivered to clients at a time.

The LNG bunkering vessel, which is almost a hundred metres in length, is being built by the Dutch company Damen. Compliance with extremely stringent safety requirements is ensured in the process of construction, and a number of control systems will be duplicated. Ice class 1A will be assigned to the bunkering vessel, and it will be able to render services to clients all year round.

The construction of the LNG ship is financed by Infortar and co-funded by the European Union. Elenger has signed a long-term contract for operating the vessel with Infortar and an agreement with Tallink for the provision of technical support and personnel.

LNG (liquefied natural gas) is characterised by very high energy content, and it can be used where natural gas pipelines are not available. LNG is used in energy production as well as land and marine transport. It is an environmentally friendly fuel which allows the content of carbon dioxide, SOx and NOx in emissions to be reduced remarkably and produces almost no soot particles.

Damen Shipyards Group operates 36 shipbuilding and repair yards, employing 12,000 people worldwide. Damen has delivered more than 6,500 vessels in more than 100 countries and supplies an average of 175 vessels annually to its customers.