In Q4 2022, the average European natural gas benchmark TTF price was 151.20 EUR/MWh, a 90% increase over the same quarter the year before. The January 2023 TTF price has settled at 119.51 EUR/MWh, broadly the same level as December. The TTF forward price for the nearest month February 2023 traded at around 80 EUR/MWh on the last day of Q4. On the forward curve, prices are in slight contango, meaning each future month is priced slightly higher than the preceding month, all the way up to February 2024 where the forward price levels are at around 90 EUR/MWh. 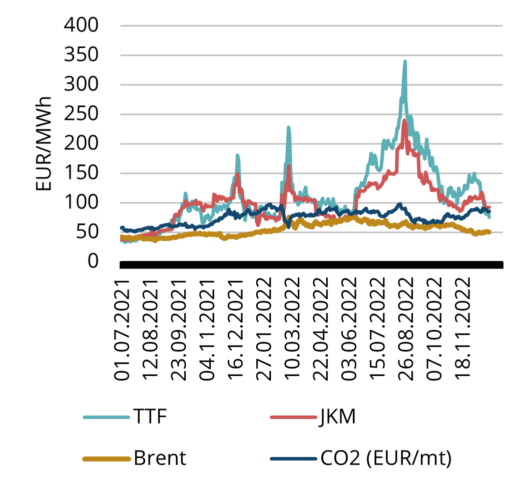 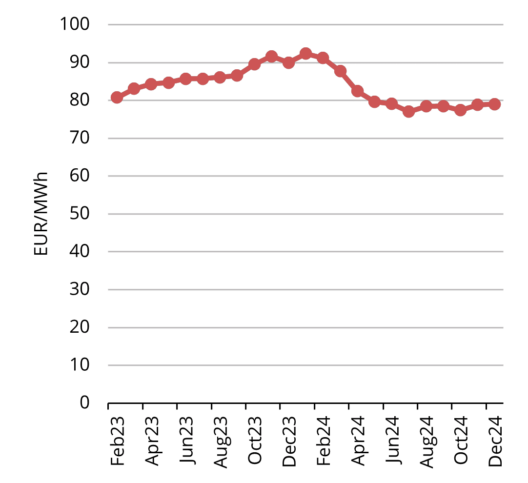 LNG import into Europe continued at a high pace in Q4. Asian demand remained muted and Asian benchmark JKM prices stayed below European TTF prices (see fig. 1). This caused a situation where LNG cargoes were drifting on European shores live-queuing to offload in the congested LNG terminals. In November, imports hit a new record and in December another peak was reached (see fig. 3). However, in the last days of 2022, due to a strong price decline, TTF prices are now trading lower than JKM (see fig. 1), which can start attracting LNG cargoes towards Asia. Meanwhile, Germany launched its first LNG terminal in Wilhelmshaven in December, with another four terminals intended to be completed during 2023.

In October, the storages of several Western European countries were full to the brim. The weather was unusually warm for most of autumn, so the demand was relatively weak both due to temperature as well as high prices. On the other hand, LNG kept pouring in. As pipelines to neighbouring countries were also congested, there was nowhere to put the incoming gas. This caused a massive drop in the spot prices to around 20 EUR/MWh. On 24 October, the hour-ahead prices in Dutch TTF area even went to negative territory for a few hours.

On average, European storages flip from injection to withdrawal mode some time in the second half of October. But due to warm weather and ample supply, this season the flipping point was only mid-November (see fig. 4). This helped maintain storages at high levels, instil confidence in European security of supply, and keep prices declining.

The above enabled European storages to enter the winter at nearly maximum of previous five-year levels. As temperatures are again seasonally warm in the end of December, we are back in injection mode (see fig. 4, green withdrawal/injection line crossing below zero in late December, and fig. 5, green storage level line turning upwards in December) which is rare for this time of year. Now the main worry regarding supply has shifted from this winter to the next, keeping also forward prices from falling below current prices.

The long-awaited Finnish LNG terminal has arrived at the Inkoo port in late December with commercial operations planned to be launched in Q1 2023. Along with the terminal in Klaipeda, Lithuania, the two terminals will be able to easily cover the gas demand of Baltics and Finland, greatly enhancing the security of supply for the region.