Tonight, the first ship-to-ship LNG bunkering took place in Estonia. Tallink’s shuttle ferry Megastar sailing between Tallinn and Helsinki was bunkered by Optimus at the Old City Harbour of Tallinn. 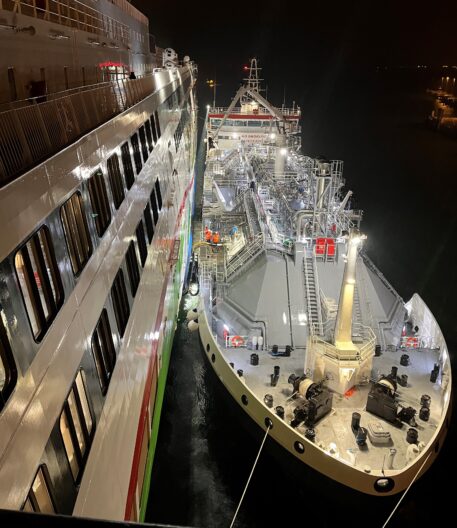 “Ship-to-ship bunkering of LNG has not been done in Estonian ports before, but our team has the relevant experience and thorough training, and everything went smoothly and safely as planned,” said Kento Tamm, Captain of Optimus.

“Most of the systems on the ship are duplicated and the risk is minimized, also the LNG fuel itself is among the safest – each year we see more and more LNG bunker ships working in ports and at sea,” said Tamm.

“Optimus significantly simplifies the bunkering of Megastar – much larger amount of LNG can be bunkered from a ship at once, from trailers we used to bunker several times a week, now only once is enough. In addition to the sea, the air will also become cleaner on roads and in ports, as Optimus itself also operates on LNG fuel,” noted Tarvink-Carlos Tuulik, Captain of Tallink.

“Shipping is looking for new environmentally friendly solutions globally and is switching to liquefied natural gas today. The LNG bunker vessel operating in our area adds certainty that ships under design and under construction will be able to use LNG as fuel here. For ship operators, the gas tanker means, above all, security of supply of this more environmentally friendly fuel and ease of use, as well as time savings, ”said Tuulik.

LNG has a very high energy content and is used in energy production, land and sea transport. It is an environmentally friendly type of fuel that allows to significantly reduce the content of CO2, NOx, SOx in the exhaust gas and produces practically no soot particles at all.

Optimus’ service area will be the Gulf of Finland region of the Baltic Sea and its immediate surroundings. The LNG ship is capable of bunkering tankers, cargo, passenger and cruise ships, its tanks and pumps both on the high seas and in ports, enabling it to deliver up to 6000 m3 of liquefied natural gas at a speed of up to 1000 m3 / hour at a time. The nearly 100-meter-long LNG bunker was built by the Dutch company Damen.