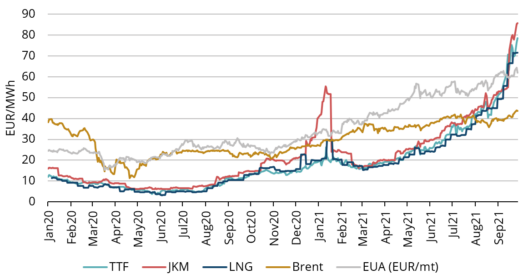 In Q3 2021, the average European natural gas benchmark TTF price was 36.54 EUR/MWh, a 488% increase over the same quarter last year. TTF forward price for 2022 is trading above 50 EUR/MWh at the time of writing, 243% higher than a year ago and 96% higher than three months ago at the end of Q2. The TTF front month forward prices have shown exceptional volatility, especially in September, where prices have fluctuated in a nearly 10 EUR/MWh range within a single day and touched a high of over 86 EUR/MWh. Gas prices have climbed higher than oil prices per MWh and the Asian LNG index JKM is leading the European TTF higher.

After a cold winter last season followed by a cold spring, the gas storages in Europe were left at low levels. That in itself would be nothing insurmountable but numerous factors have contributed to the shortage throughout the summer. Strong demand from Asia due to economic growth, the shift towards less polluting fuels and air conditioning has caused high demand and therefore high prices in Asia which attracts LNG there instead of Europe. European prices have no alternative than to keep up. As the winter draws closer, the storage inventories are lagging more and more behind last years’ levels. If the upcoming winter proves cold, this could cause gas deficits in Europe. 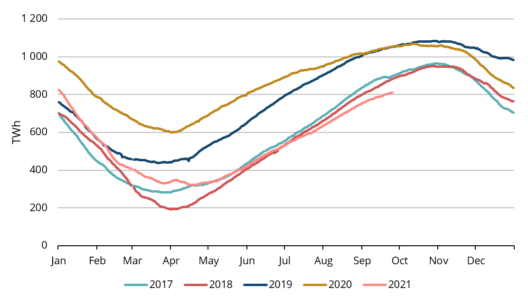 Russia is a key gas supplier to Europe. Even though Russia’s own production volumes are up about 12% in 2021 compared to last year, Russia is still limiting supplies to Europe which would enable to refill the low inventories. It is doing so due to many possible reasons. One is more attractive LNG prices in Asia which attract some of the extra production. Second is the fact that Russia’s own inventories stood very low after last winter and they prioritise refilling own domestic inventories whilst still enjoying high cash flows from European sales due to the high prices. Third is the political reason that Russia could be restricting supply and allowing deficit to ensure that Europe sees the urgent need for the Nord Stream 2 pipeline and mandates its launch sooner rather than later. Nord Stream 2 has been completed and all necessary documentation has been submitted but German authorities have approximately up to the end of the year to approve its launch, so it is expected to take several months. Although the latter political story has been widely speculated, it is highly likely that the first two economic reasons are largely the actual practical reasoning behind limited supply. This means that even if the widely anticipated NS2 launches, it might not bring along abundant gas flows this year.

The high gas prices are starting to affect the economy through factory shutdowns. CF Industries has shut down two UK sites that produce 60% of the country’s food & drink CO2 supplies. The Norwegian firm Yara has also reduced production of ammonia across Europe. Some estimates have shown that if other ammonia producers follow suit and cut production capacity, this in itself could lead to a natural gas demand reduction of around 3.5%. It is clear that the high gas prices will lead to reduced demand from consumers to some extent, but this has not yet managed to put a cap on the price ascent.