The Dutch shipbuilding company Damen has performed the inaugural cutting of metal for Elenger liquefied natural gas (LNG) bunkering ship in the Yichang shipyard in the People’s Republic of China. The ship will start refuelling Elenger’s environmentally friendly LNG clients in and around the Gulf of Finland in the second half of next year. 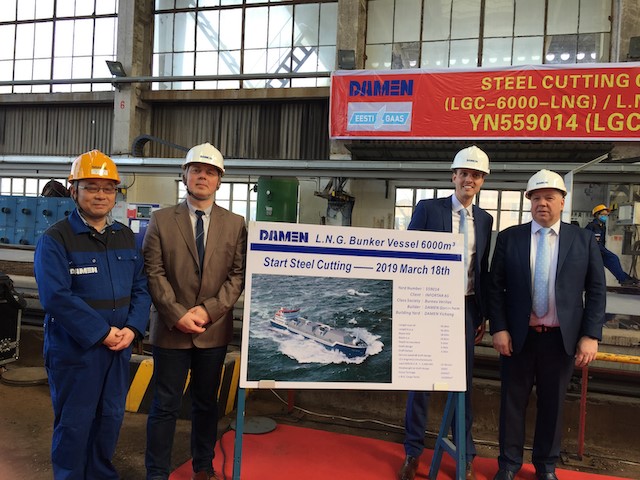 According to Kalev Reiljan, a member of the management board of Elenger, there are only a few similar types of ship worldwide, and this will be the only one in the northern and eastern reaches of the Baltic Sea. “In essence, we are establishing mobile infrastructure for natural gas as a marine transport fuel in the Gulf of Finland,” said Reiljan.

“With this high-tech joint venture, Elenger and Tallink will ascend to having the title of LNG companies with the most competence and experience in this region. Elenger has performed over 1,500 port-based LNG truck-to-ship refuellings of the Megastar ferry and now we are moving on toward offshore, more mobile solutions,” he said.

The first components of Elenger’s future bunkering vessel were cut from 8 mm thick metal and will eventually be the wall separating the ship’s engine room and the tank hold. Assembly of the ship’s hull will start in May and be completed at year’s end. According to current plans, the installation of the LNG tanks will begin in November and the ship will be launched next March. After sea trials, the ship will be ready to arrive in Estonia in summer 2020 and will start serving LNG clients on the Baltic in autumn of that year.

The new vessel will make the Baltic Sea cleaner and reduce pollution by serving the growing number of vessels in the region using LNG as a marine fuel. LNG is the cleanest marine fuel available. It enables to significantly reduce marine CO2 (30% less), NOx (85% less), SOx (99% less) and particle matter emissions (reduced by 100%).

By creating a mobile LNG-fuelling infrastructure, the LNG bunker vessel incentivises the construction and use of new LNG-fuelled vessels in the Baltic Sea Region and, therefore, has the potential to reduce CO2 emissions annually by more than 66 000 tons.

Safety is of paramount importance and is at the core of the design and build process for both the vessel class and the bunkering procedures. The bunker vessel will feature dual-fuel engines, thrusters that facilitate enhanced close-quarters manoeuvring and ice class 1A, according to the Finnish-Swedish ice-class regulations. This will allow her to operate all year round, including in the region’s challenging ice conditions.

The new vessel will be capable of carrying out bunker activities both in ports and outside ports, at designated anchorage points. In combination with the innovative hull design and running on LNG, the vessel’s emissions will be significantly lower than those of traditional vessels.

The two type-C LNG tanks will contain up to 6,000 m³ LNG at -163°C. The tanks and their piping system will be located partly exposed on the deck, which ensures good access and easy upgrade options as the LNG consumer market develops.

The LNG bunker vessel is an important part of the new mobile LNG infrastructure in the Gulf of Finland and the Baltic Sea. This project is co-funded by the EU through the CEF Transport programme.

Main particulars of the vessel:

Elenger, in homeland Estonia known as Eesti Gaas, is one of the largest and most experienced private energy groups in the Baltic region, with roots in 1865. The company runs the largest gas distribution network in Estonia and also operates in Finland, Latvia and Lithuania. The group has a total of 50,000 clients and 240 employees. In addition to supplying customers with pipeline gas, CNG, and LNG, the company sells electricity, produces solar power and develops various energy production solutions. Elenger is the LNG supplier for Tallink Grupp’s LNG RoPax vessel Megastar and the future charterer of the new LNG bunker vessel.

Damen Shipyards Group operates 36 shipbuilding and repair yards, employing 12,000 people worldwide. Damen has delivered more than 6,500 vessels in more than 100 countries and delivers around 175 vessels annually to customers worldwide. Based on its unique, standardised ship-design concept Damen is able to guarantee consistent quality.